Blog No.1: Memorial No. One

This is the first in a series of blog articles about the Registry of Deeds Archive Service. We will share details of our preservation activities, heritage events, new developments & research, as well as hidden treasures within our collections.

This article focuses on the very first property transaction registered at the Registry of Deeds on 29 March 1708 – ‘Memorial No. 1’.   As well as outlining the historical context of the parties to the Deed and the land it relates to, we will also describe the physical format of the document itself.  We hope therefore it will also be a useful guide for new researchers in ‘how interpret a Memorial record’. 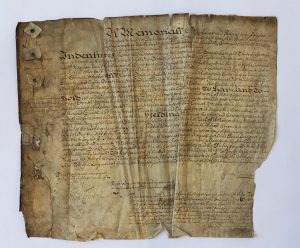 Memorial No. 1 Registry of Deeds

The Registry of Deeds was established by an act of Parliament in 1707 ‘An Act for the Publick Registering of all Deeds, Conveyances and Wills that shall be made of any Honors, Manors, Lands, Tenements or Hereditaments’. It was to secure for purchasers and prevent forgeries and fraudulent gifts of land particularly by Roman Catholics (or papists as referred to in the act). The Act came into effect on 25th March 1708.

The Act established the rules for the registering of Memorials at the Registry of Deeds and   is therefore key to understanding the conventions, protocols and content of each Memorial. The Act stated that Memorials must include date and locations and that it must be on vellum or parchment. The time of day is significant as a registered Deed had priority over an unregistered one. The Memorial was sealed by the Grantor or Grantee along with two witnesses also signing the document. One of those witnesses made an affidavit before the register or his deputy swearing that the signing and sealing of the memorial and the execution of the deed was legitimate. Once registered the Memorial must state in what transcript book, page and number it is registered. For example, Memorial One is 1-1-1, as in book 1, page 1 and number 1.

Extract from Memorial No. 1, Registry of Deeds showing the affidavit of witness John Connell

The first register appointed was Benjamin Parry. While he served in the office for almost 30 years, he personally registered only a few Memorials, including Memorial One. His deputy registers had the authority to register the subsequent Memorials

The first Memorial was registered on the 29th March 1708 (a Thursday) at 5 o’clock in the afternoon. It is a Lease and Release dated 26th/ 27th March respectively between Nanfan the Earl of Bellomont (the Grantor) and Connell Vereker (the Grantee). The town and lands subject to the lease were those of Stephenstown and Ballinscala containing 383 acres, 1 rood and part of the lands of Fantstown containing 105 acres, located in the Barony of Coshlea in Co. Limerick. It was assigned to Connell from 1st November last (1707) for the natural lives of himself, his brother Henry Vereker and his eldest son also Henry Vereker. The rent was 6 shillings & 6 pence per acre, total amount being £158. 12s of yearly rent payable in equal portions on 1st May and 1st November. The Memorial also details the party signature, Connell Vereker, his witnesses Daniel Golborne and Richard Nanfan. The Memorial was registered by Benjamin Parry.

The Grantor is the sellor or the lessor of the land or property in question. For Memorial One this is Nanfan Coote, 2nd Earl of Bellomont born in 1681 and died 14th June 1708. His parents were Richard Coote, a former Governor of New York, and Catherine Nanfan, Richard’s title was initially Baron of Coloony, he later became the first Earl of Bellomont with Nanfan inheriting both those titles in succession. Nanfan married Lucia Anna de Nassau d’Auverquerque born in the Netherlands whose father was a second cousin to William of Orange. She is mentioned in later Memorials, as Lucy Ann Countess Dowager of Bellomont. The title was succeeded by Nanfan’s brother Richard, 3rd Earl of Bellomont had extensive property as shown by other transaction recorded in the Registry of Deeds. Descendants of a branch of the Coote family still own property in the Kilmallock area.

Connell Vereker, the grantee in the first memorial is described as a Gentleman and from Ballinscala. The grantee is the purchaser or lessee of the property.  In later Memorials in the Registry of Deeds his address is given as in Cork and then Roxborough Co. Limerick. His parents were Henry Vereker and Mary Connell, he married a Mary Godsell. Vereker purchased land in Roxborough during the reign of Queen Anne from Hollow-Blade-Sword. He was listed as the Grantor for future transaction for property in Cork. He also held the office of High Sheriff of Limerick in 1729. Vereker died in 1733.

Extract from Memorial No. 1 describing the properties effected by the Deed.

Ballinscala (or Ballinscaula) and Stephenstown are adjoining townlands located in the Barony of Coshlea in Co. Limerick close to the town of Elton. The townland of Fantstown is west of those along the R515 from Elton to the town of Kilmallock, (an adjoining townland to this is Mountcoote named after the Coote family). Today the townlands size appears to have increased, Stephenstown measures at 172 acres, 1 rood, 10 perches, Ballinscaula measures 674 acres, 1 rood, 28 perches and Fantstown has a total of 365 acres, 2 roods, 15 perches.

After the Cromwellian settlement of Ireland, the townlands of Ballinscalla, Steevenstown and Fantstowne passed from Nicholas Haly and Gibbon Fitzgibbon to Lord Collooney (Richard Coote). The greater part of the Barony of Coshlea, part of the golden vale, was owned by the Fitzgibbon family, also known as ‘The White Knight’ or sons of the old knight. The Fitzgibbons were a branch of the Fitzgerald house where two additional knighthoods derived from such as the Knight of Glin, the Black Knight, and the Knights of Kerry, the Green Knight.

Later Memorials registered in Registry of Deeds record that the townlands matching the description in Memorial one, were found in Memorial 17-470-9475 dated to March 1716 between Richard, Earl of Bellomont (brother to Nanfan), Lucy Ann Countess Dowager of Bellomont to George Evans. This Memorial is interesting as it refers back to an Indenture of Agreement, similar to a marriage settlement, dated 17th February 1704. It was referred to again in Memorial 26-364-15711, in Articles of Agreement with George Evans and his second son Eyre Evans as the Grantors prior to his marriage to Sarah Dickson and the townlands are described as lately purchased by George Evans. By 1858 it appears that the townlands are in the ownership of Sir Peter Fitzgerald, the 19th Knight of Kerry. 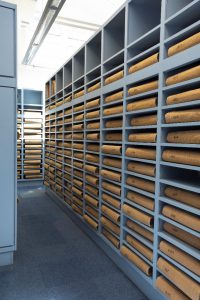 After the Memorial No.1 was registered on 29th March 1708, it would have then been transcribed in full into a Transcription Book by Registry of Deeds clerks, and indexed in Names Index and the Townlands Index.  You can find information on these record types at  https://www.prai.ie/registry-of-deeds-services/#records and we will explore more in-depth in future articles.