Blog No. 2:  Architects of the Registry of Deeds and The King’s Inn

The Registry of Deeds was established by an Act of Parliament in 1707 that came into effect on 25th March 1708. Initially it was located at Dublin Castle and in 1805 moved to Inns Quay (near the Four Courts). In 1832 the Registry of Deeds moved again to its current location at the top of Henrietta Street alongside King’s Inns.  This blog will give an overview of the role of specific architects and others in the construction of King’s Inns complex at different time periods.

In 1793-4 The Society of King’s Inns acquired land near Henrietta Street, on what was then known as Glasmainogue Road. The building originally occupied by the Society had fallen into disrepair. 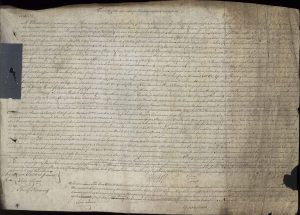 In 1800, James Gandon was appointed to design a dining hall, library and residences for The Society of King’s Inn at the Glasmainougue site. Gandon was one of the most popular architects at the time in Ireland and well known for his work on the Custom House and Four Courts. Gandon’s original design was for two long parallel buildings with the dining hall on the left and the library on the right with a narrow bridge like structure connecting the two buildings at the west front. This arcade has three openings with a cupola – a domed structure supported by columns-on the roof. 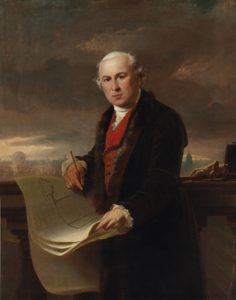 The first stone of the new dining hall was laid on 1st August 1800 by Lord Chancellor John Fitzgibbon, Earl of Clare. However, the project was beset with delays and funding issues and by 1808 Gandon had resigned and handed the project over to his assistant Henry A. Baker. 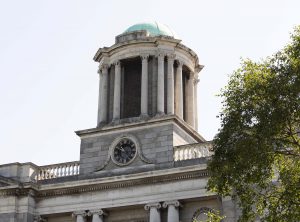 Born in 1753, Baker was a student of Gandon’s who worked with him from 1786 and acted a clerk during the initial construction phase of King’s Inn.  Baker was a teacher of architecture in the Dublin Society’s School from 1787 until his death 1836. He also worked on preparing schemes for the Wide Street Commissioners and won first prize for his design converting the Irish Parliament building to the Bank of Ireland.   By 1813, the right wing (the proposed library) was still unfinished and a statue was passed by King’s Inn granting this wing to Commissioners of Public Works for Public Records on condition that the exterior was completed in accordance with Gandon’s original plans. 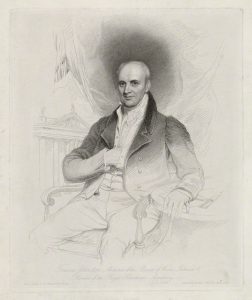 Born in 1760, Francis Johnston was appointed as architect to the Board of Works in 1805. He oversaw the completion of the right-wing along with Gandon’s cupola, as well as converting the designs for the interior of this wing into offices for the purpose of public records. This work was completed by 1817.  Johnston also designed the crested gateway in the 1820s at the top of Henrietta St and his other works included Royal Chapel at Dublin Castle and the General Post Office (GPO) on Sackville St. (now O’Connell Street). He died in 1829. 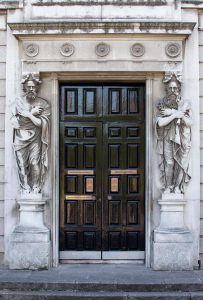 Doorway to Registry of Deeds guarded by caryatids Security and Law

The entrances to each wing of the King’s Inn complex are flanked by caryatids made of Portland stone from Isle of Portland off the coast of Dorset and have friezes above the entrances. The caryatids carved at the King’s Inn dining hall (left wing) are Plenty with a cornucopia and Bacchante with grapes and wine. The caryatids to the Registry of Deeds (right wing) are Security holding a key and scroll and Law keeper of records. There is also a frieze over the centre archway which is a relief of Queen Elizabeth presented with a bible by Bishops and the Magna Carta by Barons.

Sculptor Edward Smyth who was born in 1749 and is credited with designing the caryatids and freizes. However as he died in 1812, it is likely that the caryatids at the Registry of Deeds wing were carved by his son John Smyth (c.1773-1840). John Smyth was also engaged by architect Francis Johnston to carve sculptors at the General Post Office, Sackville street,

In 1846 architect Fredrick Darley designed a three-bay extension for the King’s Inn wing, for a basement and ground floor extension to the front side. His plans were approved and it was requested that another storey be included in the design. Darley was a pupil of Francis Johnston. Darley also designed the library for the King’s Inn located at the top of Henrietta St which was erected between 1826-1832. 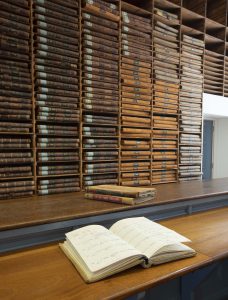 Transcription Books in Public Counter at Registry of Deeds

In 1849 the Board of Works proposed a similar extension to the Registry of Deeds wing. This was based on designs by Jacob Owen. Originally from Wales, Owen was an engineer and architect to the Board of Works appointed in 1832. He also worked on Arbour Hill Prison and the Stable and Carriage block at Dublin Castle. The extension to the Registry of Deeds consisted of a large plain wing for fireproof strong rooms for storing records over three floors and in the basement, along with toilets, a carpenters’ shop and a book binder. The extension visually complemented the three-bay extension by Fredrick Darley on the King’s Inn wing.

The King’s Inns complex that can be seen today is therefore somewhat changed from Gandon’s original plans. A major refurbishment project was carried out in the Registry of Deeds in 1998 by O’Connell Mahon Architects and overseen by the Office of Public Works which consisted of renovations to the entrance lobby and conservation works to the staircase, windows and roof.

The interiors of Gandon’s other major public works the Custom House and Four Courts were destroyed during the Irish war of independence and civil war respectively.  The King’s Inns Dining Hall is therefore Gandon’s only public interior that has survived intact to the present day.

Further sources to explore the architects and architectural history of the Registry of Deeds and King’s Inn include: