Blog No. 7: Women & Property in the Registry of Deeds

Registry of Deeds staff participate monthly in Dublin City Council Culture Club online events to showcase the archives that are held at the Registry of Deeds. The theme for March 2021 was based on a selection of memorials relating to women and property. Here we will explore some of the memorials featured in the virtual tour, focusing on examples from the 18th century and the wealth of information that can be discovered within our records. 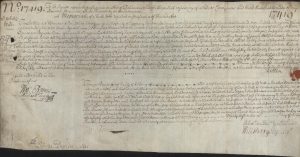 The memorial above is the Last Will and Testament of John White, late of Cappagh, Co. Tipperary. It is dated the 20th September 1718 but was not registered until 16th December 1720, a very common occurrence as there is no time limit for registering a deed. Rebecca White is identified as John’s eldest daughter and is bequeathed ‘all his real and personal estate’. She is appointed the executrix of his Will, making her responsible for managing and providing from her father’s estate his requests to his additional children. To his daughter Charlotte, he grants £1,000 and one moiety (a division of two parts) ‘of all his plate, linen, beds and all other of his household goods’. He grants £500 to his son, Newport, and leaves £200 to his other son, Richard, along with his interest in the lands of Longford, Co. Limerick, which were held from John’s brother Deane White.

This memorial is fascinating as John White bequeaths his estate to his eldest daughter instead of his eldest son, which was more typical at the time. Rebecca is also given the responsibility of fulfilling her father’s final wishes.

Another memorial of interest is a lease dated 25th June 1740. The lease is between the Mayor, Sheriffs and Citizens of the County of the City of Waterford, and Mary Mason, described as a spinster of that city. The memorial details the location of the property, which can be helpful in identifying the specific area as no maps are lodged with the Memorials.

‘All that and those one garden plot bounded on the south with Dobbyn’s Lane on the west with the most of St Michael’s Church yard on the east side with the city wall and on the north with the lane formerly leading through the City Gate in Lady Lane and which premises were formerly in possession of William Dapwell deceased on part of which there was then a small tenement built’.

From this extract we also learn the name of a former occupant, William Dapwell. 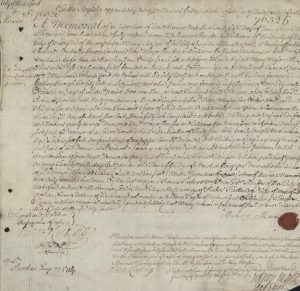 The duration of the lease is 999 years beginning on 25th March 1740.  This particular memorial is interesting as its purpose was to ensure that ‘a schoolhouse is built and the number of 34 girls yearly taught’ for ‘the yearly rent of 1 peppercorn if demanded’. A peppercorn was the term used for a small fee payment and, in this instance, it may not be requested by the Mayor, Sheriffs or citizens of Waterford. The memorial goes on to state that, if the property is not to be used as a school or the girls are not taught there, the yearly rent will be £2 and 5 shillings to be paid half yearly on 29th September and 25th March.

From some background research, we know that Mary was the daughter of Sir John Mason and that it cost £750 to build the school. Charles Smith’s 1774 book, Ancient and Present state of the county and city of Waterford, states the that the houwas a neat brick building with the rustic work hewn stone door and windows cases and in the front features the family arms ‘Pietas Masoniona, 1740’. Smith also states that the girls were taught there from the age of seven and trained for service. It was a type of charity school known as a blue coat school, named for the distinctive blue uniform worn by the pupils.

Finally, Memorial 141-314-95571 is a deed of lease, dated 7th March 1748, between the Right Honourable Robert Lord Baron of Belfield and Margaret Lorcan, a widow. Please note that if you are searching the Names Index and the grantor has a title, such as Belfield, you must search under the title and not the individual’s surname.

The memorial provides details of previous occupants, as well as a description of the property, including measurements:

‘…the tenements several years ago in the tenancy or occupation of George Thomas merchant and his under tenants & since that in the tenancy of James Begg of Athlone, Inn keeper and now in possession of Margaret Lorcan containing sixty six feet in front street ward and in depth running backward to the River Shannon with the backside houses and outhouses thereunto belonging situate lying and being in Conaught side or part of Athlone…’

The Inn goes by ‘the name of the Three Blackheads in Athlone’ and the lease is for ‘thirty one years from the first day of Nov. last past’ for the yearly rent of £30. The memorial is noteworthy, not only because a woman is leasing the Inn, but also because we know that this particular Inn is now known as Sean’s Pub, recognised as Ireland’s oldest pub by the Guinness Book of Records. The Inn also became known as the Three Blackamoor Heads and was a popular gathering spot for the military and town elite to celebrate victories.

An added bonus of information was discovered among our records in a later Deed of Assignment dated 6th May 1755, registered as Memorial 175-477-117981. In this, we learn that Margaret has remarried to a Thomas Nolan. Thomas and Margaret Nolan ‘otherwise Lorcan his wife’ have assigned the lease to Dillon Naughton, Merchant. This memorial also refers to the lease of 1748, using an identical description for the Inn.