Blog No 6: Memorials of Rathborne Candles at the Registry of Deeds

To celebrate Candlemas Day on 2nd Feb, this blog will be looking at a series of memorials relating to the world’s oldest candle manufacturer, ‘Rathborne Candles’ which we have been able to source here at the Registry of Deeds, and date from 1711-1912.

Apart from the popular candle traditions relating to the celebration of Christmas, many people may not have heard of Candlemas. This day, celebrated on 2 Feb, commemorates the visit of the Virgin Mary to the Temple, forty days after the birth of Jesus, in order to be purified according to the strict Jewish laws of the time and also to present the infant Jesus to God as her first-born. Sometime during the 5th Century, the practice of observing this festival with lighted candles took hold and the name developed from this tradition.[1] At one point, demand for candles for this day was so high that as soon as the Christmas market was satisfied, production at candle factories, including Rathbornes, was again at peak output, with staff working overtime in order to meet the market needs for the occasion. [2]

We know that in the mid-1400s, a member of the Rathborne family (or ‘Rathbone’ as they were sometimes known) came to Dublin from Chester in England and set up their first candle manufacturing business on Wyne Tavern Street in 1488. Candle manufacturing was already thriving in the area, but Rathbornes managed to earn a foothold in the competitive market and have navigated the business into the 21st Century. 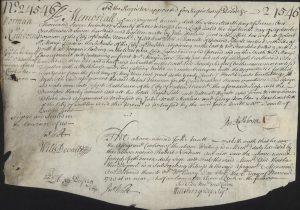 By the time the Registry of Deeds was established in 1708, a young man named Joseph Rathborne (born in Drogheda in 1679) was at the helm of the business. The very first memorial we have discovered relating to the business is his signing of a lease in the year 1711 on a parcel of ground for a term of 90 years. The plot fronting Great Britain Street (modern day Parnell Street) measured 20ft wide x 70ft long and warranted an annual rent of £3. 7s. 6d. (Memorial 015-304-007563)

For the rest of the 1710s we would see Joseph taking out two further leases, for properties on Drumconragh Lane, now Drumcondra Lane, (Memorial 016-305-007564) and Dragheda Streett, meaning Drogheda Street, now constituting part of O’Connell Street (Memorial 015-304-007565), respectively, and also legally confirming with a neighbour what they planned to do with a party wall between them: “…said Rathborne did acquitt sd. James Greare of half the charge of building sd. wall…” (Memorial 046-455-029735). Supplementary to their property descriptions and legal value, we often find other fascinating glimpses into the past hidden in the documents. For example, the aforementioned 1718 memorial relating to the party wall was witnessed by one John Homan whose occupation is recorded as being that of an apprentice to Joseph Rathborne. The other witness in this particular memorial was a ‘John Brock of Dublin, Joyner’, who was actually the person who had leased the plot on Great Britain Street to Joseph seven years earlier, and is evidence of an ongoing business relationship between the pair.

In the 1700s, because of the difficulty of distinguishing one property from another in the memorials (most houses didn’t have numbers at this point, let alone Eircodes), we are typically given brief details of the holdings or recognisable landmarks “bounding and mearing” the given property on all four sides of the compass. These generally constitute neighbouring tenants’ names, property owners, lane and street names, but can also include yards, passages, mud walls, quickset hedges, meadows, paddocks, watercourses, and millstreams.

The property description therefore not only helps us identify the location of the property, but also gives valuable historical information for the time for those who owned or lived in the adjoining properties. The memorials also typically give the measurements of the property in feet, which allows us to envisage the size of the plots. Thankfully due to these details, it makes it easier for us to identify which plots may have been subject to multiple leases or conveyances over a period of time and detailed in multiple memorials.

For example, on the 28th October 1743 we see that Joseph Rathborne, Jnr, Gent, leases a dwelling house and fields in the town of Clontarff to one Richard Civill, Merchant, containing four acres and four perches in total for a term of 78 years at £23 a year rent. (Memorial 112-165-077545). The property description, size, and boundary neighbours are identical to the property description in Memorial 069-202-047925 which is a 91 year lease his father took out 12 years previously  in 1731 from one John Vernon of Clontarfe, Esquire. Interesting the value of the rent on lease per annum in 1731 was £8, compared to £23 in 1743

The Memorial records also reveal aspects of the Rathborne family history throughout the 18th and 19th century as the business and associated properties are transferred between Joseph Rathborne Snr’s seven children following his death.