Blog No. 3: Daring Daylight Raid at the Registry of Deeds

In this blog we will journey back to 1920 to discover the events that led to the raid on the Registry of Deeds, learn how the raid was planned and how it all unfolded. The sources used to reconstruct this story include contemporary newspaper accounts from papers such as Irish Times, Evening Herald, Belfast Newsletter as well as witness statements from the participants from the Bureau of Military History published by the Military Archives.

In 1920 Ireland was in the midst of the War of Independence, a guerrilla conflict between the British state and the Irish Republican Army.  Two of the leaders of the Republican movement Michael Collins and Richard Mulcahy ordered that raids be conducted on RIC barracks in order to acquire arms and ammunition. This led to acts of violence around the country both from the Irish and British forces. Following a raid on the Income Tax Office on the 3rd April 1920 military detachments were deployed to several government buildings including the Registry of Deeds. 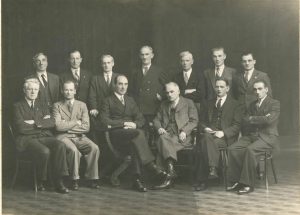 The raid on the Registry of Deeds was planned by the First Battalion Council (pictured here at a reunion in 1930’s). Jerry Golden pictured top row, 4th from left was the instigator of the raid.
Source: Pic: Dublin Brigade Review (1939)
South Dublin Libraries,http://hdl.handle.net/10599/11548

On the 17th May 1920 Jerry Golden, a member of the B Coy 1st Battalion Dublin Brigade 1916, was in charge of strikers picketing at King’s Inn alongside the Registry of Deeds. The strikers were Law Clerks and they were seeking better pay and working conditions. At the time a military guard, made up of a sergeant and twelve men from the Lancashire Fusiliers were stationed in the building. Golden observed that their discipline was very lax, some of the soldiers were frequently found in the green outside with their girlfriends and Golden even had the opportunity to enter the guardroom. It was here in the guardroom where he was able to take note of all of the arms, ammunition and the location of the field telephone. That afternoon Golden relayed this information to his commanding officer Vice Brigadier Peadar Clancy. He arranged a permit for Clancy to pass the picket line and visit the Registry of Deeds under the alias Charles Kinsella. The following day one of the men on the picket brought a camera to take photographs of the picket line. Golden took several snaps and couldn’t believe his luck when the Sergeant asked him to take a picture in the guardroom itself which he was able to pass on to Clancy. 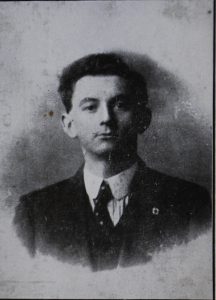 Clancy attended the building on the 19th May, with falsified permit claiming to be Charles Kinsella, a solicitor’s apprentice from Ennis with business to conduct in the Registry of Deeds.  He was escorted around the building by Golden. He was able to see the location of the guardroom and the layout of the building. The raid was then planned over three meetings of the 1st Battalion Council where they discussed how the arms and ammunition would be divided, who would take part and how exactly the raid would take place. It was agreed that it would occur on a sunny day when there would be a possibility that the guards would be inactive. Monday, the 31st May was agreed upon. However as the weather wasn’t good on the Monday, it was decided to postpone the raid until the following day.

On the 1st June 1920 at 3.00pm unmasked and armed men from the 1st and 3rd Battalions of the Dublin Brigade, the Squad and the intelligence sections of the IRA assembled in Parnell Square. They divided up in to groups and made their way to the Registry of Deeds. 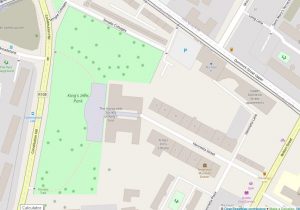 Route from Parnell Square taken by 1st and 3rd Battalions of the Dublin Brigade on 1 June 1920
Source: OpenStreetMap Contributors

They approached the building from every direction possible, the one gate on Henrietta Street and both gates on Constitution Hill. They closed off the courtyard, temporarily imprisoning whoever happened to be there. Some men took up positions at street corners in the vicinity to keep watch, some kept watch in the grounds and a select few which included the young Kevin Barry entered the building. 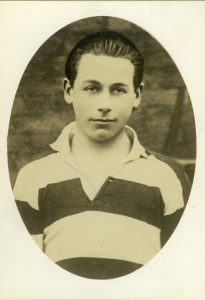 Kevin Barry (1902-1920) was later sentenced to death for his role on a similar raid in nearby Bolton Street on 20 September 1920
Source: Desmond FitzGerald Photographs. P80/PH/175, UCD Archives

The soldiers inside were taken totally by surprise. They were ordered to put their hands up and turn their faces to the wall which they did with no resistance. The soldiers outside on the grass were taken prisoner and marched into the building. After cutting the telephone lines the raiders made their way to the guard room to retrieve the arms and ammunition that they came for which  including a Lewis machine gun and 30 rifles. They loaded the loot into two awaiting motor cars and then leisurely made their escape on foot. As the phone lines had been cut the Sergeant had to cycle to the North Dublin Union to raise the alarm and within minutes 2 lorry loads of troops arrived and the area was sealed off. 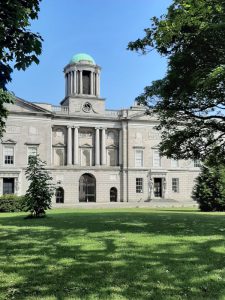 Holding the raid on a sunny afternoon was key to the success of the raid. It caught the Lancashire Fusiliers by surprise as they were enjoying the pleasant weather and relaxed atmosphere in the park surrounding King’s Inn.

As a result of the raid on the Registry of Deeds security in other government buildings in the capital was tightened, the military sentries stationed outside the Custom House building and the Dock premises were withdrawn inside.  The raid was a success for the IRA in more ways than one. The excellent planning and organisation skills they displayed ensured that arms and ammunition were retrieved and not a single injury was reported. Local public support on the day lay with the IRA, with the Irish Times reporting on the 2nd June that when it was over a crowd, which had collected cheered the raiders. The Lancashire Fusiliers that were stationed in the Registry of Deeds were held to account. A court-martial was held and that the sentry on duty was sentenced to 12 months imprisonment.