Blog 10: The 1922 Four Courts Occupation and Fire: Impact on Land Registry and Registry of Deeds

The Registrar of the time, William Glover, was determined that the work of the Land Registry would continue despite the occupation of the Four Courts. Immediate arrangements were made to relocate Land Registry staff to Registry of Deeds building on Henrietta Street and Coleraine House just outside the park gates on Constitution Hill. The Benchers Hall in King’s Inns, when available, was also utilised by Land Registry. Between Easter and July 1922 nearly 6,000 transactions with registered land were lodged and dealt with in the temporary offices. 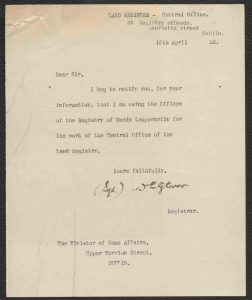 Shortly after midnight on Wednesday 28th June 1922, troops of the Free State Army began firing on the Four Courts complex. Following two days of fighting, the Four Courts Garrison surrendered, however, not before an explosion occurred in the complex. The explosion destroyed the Public Records Office and damaged part of the Land Registry building. 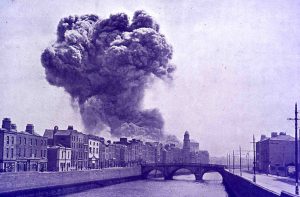 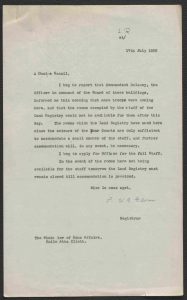 Once it was deemed safe by the Office of Public Works to enter the Four Courts complex, Raymond Smith as a ‘trustworthy official’ was appointed to assess the damage to Land Registry records and offices, and to remove any items which staff needed to conduct services from Henrietta Street. In a memorandum dated the 20th July 1922, Smith surmised that the Land Registry Building ‘to the layman it appears to have sustained less damage than any of the other buildings in the Four Courts, some of which are obviously in a very dangerous condition’. However Smith was unable to examine the upper floors as the means of access, the staircase, had been destroyed. Smith was informed of a fire at the top floor of the building and potential loss of some records. It was later discovered that Land Registry mapping sheets and instruments for over 7,500 folios had been destroyed. Land Registry Local Offices around the country were asked to supply copies to replace these burnt folios. 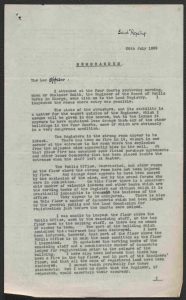 Smith also prepared a list of articles to be removed from the Land Registry Office which included tables, chairs and slip desks, along with the Central Office Seal, and Land Registry Records. 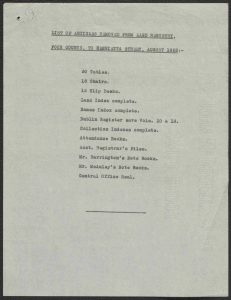 The temporary use of accommodation by Land Registry staff at the Registry of Deeds Office continued until July 1923 but was described as ‘wholly inadequate’. In a letter dated 4th September 1922 written to the Secretary to the Ministry of Home Affairs, it stated that Land Registry staff were housed in a corrugated iron hut in the rere of Registry of Deeds, three rooms and a vault in the main building, which had no space for furniture and one was merely a passage, and the Lecture Hall of the Benchers of the Kings Inns. They were also loaned tables and chairs by the Kings Inns in order to work. The letter highlights the concern of staff, especially those located in the iron hut as there was insufficient heating or lighting and a fear of further leaks when it rained during the autumn and winter months. 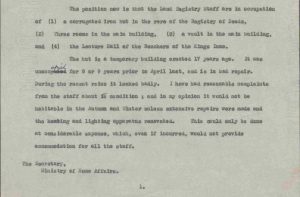 In a Memorandum dated 16th October 1922 from Raymond Smith of the Land Registry to Sir Philip Hannon, Smith outlined the measurements of floor space in use to accommodate 103 of the Land Registry staff with additional descriptive remarks such as   ‘very bad room’ and ‘a mere passage’. 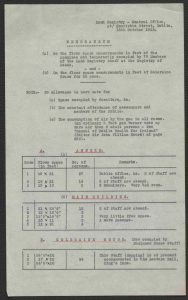 Smith’s initial analysis that the Land Registry building had sustained less damage than others in Four Courts complex was proven correct.  The Land Registry building had been constructed between 1912-1914, and the Irish Times reported on 23 August 1923 that  ‘the condition of this block is a wonderful testament to the value of modern methods of construction’ and that ‘although the south west corner at the back had been slightly damaged in the explosion which brought great havoc in the Four Courts generally, the main portion of this building withstood the shock of the explosion and outlasted the withering blasts of fire so effectively that when the work of reconstruction was taken in hand it was found that the original walls and floors were in sound condition’. 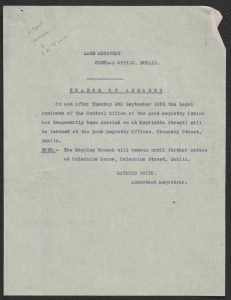